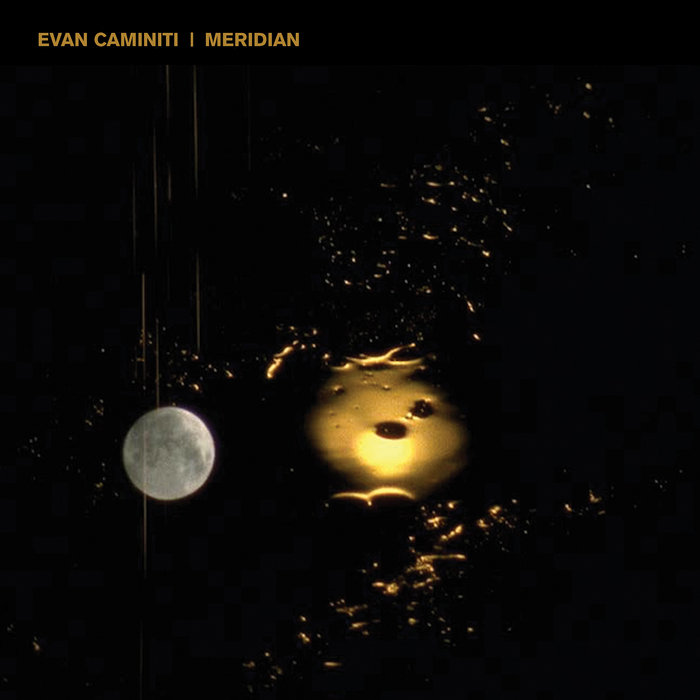 Evan Caminiti’s slow but steady progression towards electronic music from sand-swept guitar drone mirrors the pace of the music he makes. It has been measured, each move well-considered and clearly intentional. Caminiti has immersed himself in electronic production on Meridian, creating organic sounds through his machines, patching sounds that recall the brassy resonance of horns and hazy choral clusters. Synthesizers hiss and crackle under layers of reverb and fog. Sounds undulate and implode in upon themselves, with bursts of noise dropping in and out to create shadows of rhythm. Caminiti’s electronic systems do not run autonomously - the sounds heard on Meridian required real-time human interaction to bring them to life, and that human touch is essential to the mysterious atmosphere he produces on this new album.

On Meridian, Caminiti expands upon the themes he began developing on two of his previous solo works, Dreamless Sleep and Night Dust, and with his other project, Barn Owl. Barn Owl's most recent album, V, incorporated more electronic textures and layers than their previous works, hinting at the direction that Caminiti takes on Meridian. While Dreamless Sleep and Night Dust were centered around Caminiti's guitar and his manipulations of the instrument, Meridian highlights Caminiti's dextrous synthesizer work and production skills. Chiming tones float above monstrous swells of sub-bass, creating the illusion of a massive spacial divide. Caminiti adds rhythms and dynamic swells to abstract sonic textures and field recordings taken over the course of two years, grounding the album in specific times and places, however obscured from the listener.

The album takes its name from the concept of energy flowing throughout the body along different paths called meridians. The pieces on Meridian were developed through live performance and made with the intention of being played at full volume, causing the sounds to course through the veins and along the meridional paths. The tracks pulsate and flow, from the throbbing beat of "Collapse" to the orchestral sounds of "Wire," all connected by the foggy, atmospheric framework established on album opener "Overtaken."

Meridian was recorded and mixed in San Francisco and New York between 2013 and 2015. Caminiti plans to do some rare solo touring around the release.

Bandcamp Daily  your guide to the world of Bandcamp